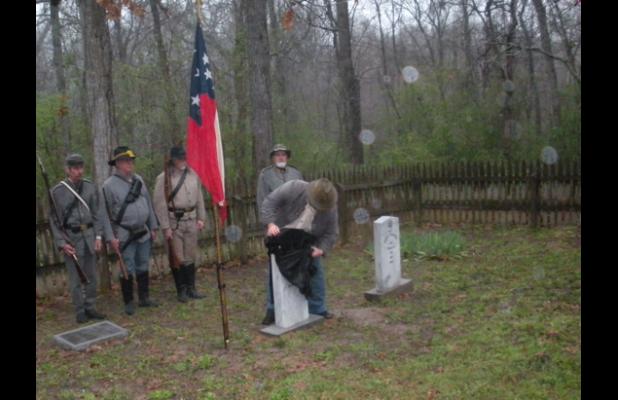 Are those the orbs of spiritual energy of unidenitied soldiers buried in unmarked graves floating up to salute the Stars and Bars one more time? Photographer Steve Mayeux said they are probably droplets of water -- he thinks he remembers it was sprinkling that day, but can't rightly recall for sure.

Haunted Avoyelles
By Raymond L. Daye
“Ghost hunters tell me this is called a ‘spiritual vortex,’” Mayeux said. “In this vortex, cellphones won’t work, batteries go dead and things like that.

{Editor’s Note: “Haunted Avoyelles” is a series of articles looking at local ghost stories. We hope you enjoy this Halloween series.}

Cemeteries are a favorite place for ghosts -- after all, they don’t have to go very far from home to take a midnight stroll.
War is also a good source of ghosts because it cuts down so many young men and women, leaving them with “unfinished business.”
When war and cemeteries can be combined, it will usually create a lot of interest among “ghost hunters.”
It is no wonder that the Fort DeRussy Cemetery outside of Marksville has gotten a reputation as the “most haunted place” in Avoyelles Parish. There have been numerous sightings and other-worldly experiences by visitors to the graveyard.
Skeptics chalk those up to purely natural -- not supernatural -- sources; believers are convinced the cemetery is a hotbed of ghostly activity.
“We have had our share of ghost hunters at Fort DeRussy,” local author and historian Steve Mayeux said. “I may be responsible for some of those ghost stories,” he added with a laugh.
As president of the Friends of Fort DeRussy organization, Mayeux spends a lot of time on the grounds of the former Civil War fort and adjoining properties, including the cemetery, which is not part of the state-owned Fort DeRussy property.
“I have been out there in the middle of the night on many occasions,” he said. “One night these high school kids were walking around, shining their flashlights everywhere,” he continued. One of those beams shined on Mayeux.
“One of them said, ‘It’s a statue.’ Another said, ‘No, it’s a dude.’ I wouldn’t say anything to them.”
He may or may not have “disappeared” in between flashlight flashes.
Brad Duplechien, a Mansura native and founder of Louisiana Spirits Paranormal Investigations, said his investigators have been to DeRussy several times.
“The road to the cemetery is a long and ominous path,” Duplechien said. “The grounds are small, yet intimidating.”
He noted that sections of the cemetery have been roped off to avoid future burials due to the discovery of “unmarked graves of soldiers who died in battle!”
Duplechien said investigators “have experienced EMF spikes, EVPs, ectoplasm photos, multi-colored orbs and altered states of equilibrium.”
(For more on EMF, EVP, ectoplasm and more “ghost-speak” terms, as well as more tales of Avoyelles investigatons from Louisiana Spirits, watch for a future article in the series.)
Groups from Alexandria, Fort Polk, other Central Louisiana parishes and even outside this area and out-of-state have come to the graveyard.
“It is a spooky place,” Mayeux conceded. “You have to go through a dark tunnel to get there.
“One person tripped and dislocated her shoulder and it took the longest time to get an ambulance to go out there," he continued. "They thought they were going to be ambushed for any drugs they might have on the ambulance. I had to get on the phone and assure them that there was a girl hurt very badly and in need of their attention.
“In their defense, there is only one way in and one way out -- so it can be a very dangerous place.”
An 1862 map of Fort DeRussy includes the graveyard, so it has been in existence for at least that long. Mayeux said the oldest marked grave is 1898, “but there are many unmarked graves. Soldiers were buried there during the Civil War. We know that.”
It is still an active cemetery.
“Not long ago they were digging a grave and came across human bones,” Mayeux recalled. “They were at the legal depth for burial so they asked the family if they wanted the deceased to be buried there or for them to move over a little and dig another grave. The family said to use that grave.”

‘Will find a ghost’
If a ghost hunter goes out there, Mayeux “guarantees” they will find a ghost.
“It may be a ‘possum or raccoon walking around out there, but to them it is definitely a ghost,” he said. “They have told me, ‘I can tell it is walking on two legs. It is definitely a spirit.’”
Mayeux is obviously a skeptic when it comes to other-worldly occurrences at the historic cemetery. However, he has had his moments of doubt.
“One Halloween I was out there just to make sure there were no problems,” he said. “Kids often like to go out there on Halloween -- you know, midnight in the cemetery on Halloween.
“There was a group out there around 8 p.m. and I told them to leave, that it wasn’t safe,” Mayeux continued. “By 10:30 p.m., I was pretty sure nobody else was coming out, but I decided to stay until midnight -- mainly to say that I was in a graveyard at midnight on Halloween.”
Mayeux said he tried to take a little catnap, but cemeteries aren’t very restful for the living.
“It was dark and quiet, with nothing moving at all,” he said, setting the stage for his story. “It was a minute before midnight -- I know because, for some reason, I looked at my watch. “Suddenly, some coyotes jumped a fox. The fox screamed, the coyotes yipped and every dog in Avoyelles Parish started in,” Mayeux said. “A minute after midnight, it was all quiet again, like nothing had ever happened.”
For just that brief instant, it sounded like all the demons of Hell were screaming as they walked between this world and the next. But it was natural -- not supernatural -- “demons.”
Another brush Mayeux had with turning in his skeptics’ badge came one night when he was in the cemetery area.
“I caught a glimpse of something out of the corner of my eye,” he said. “I looked closer, but didn’t see anything. The moonlight struck it and it was a shining ball of some kind. It looked like it was rising from a grave.”
Wanting to see, but not really wanting to see, what was at the grave, Mayeux shone his flashlight on the suspicious tombstone.
“It was a milar balloon, filled with helium, that someone had tied by the grave marker,” he said.
Another mystery solved.
Duplechien added another DeRussy tale, of a mechanic who has vowed to never go back to the site because the last time he and some friends went there“ the gate had closed on its own behind them, and he and his friends had heard screaming from the direction of the fort.”
Another possible source of hauntings is a grave that had been left outside of the original cemetery, but was included when a new fence was erected about 15 years ago.
Duplechien said there are several stories as to why the grave was not allowed in the cemetery. Some say it was a suicide, others say it was because the deceased had married a black woman. Most refuse to talk about the grave at all, he said.
The question is: How do the old residents feel about their new neighbor?
“DeRussy is certainly the creepiest place in Avoyelles Parish,” Duplechien said. “I don’t know if I would say it is the ‘most haunted.’ There have been numerous reports of unexplained occurrences in the Yellow Bayou area near Simmesport -- in homes in that area and around the battlefield.”

The Vortex
Most graveyards are laid out so that all of the deceased are facing the same way. On rare occasions, graves will be laid out with the feet of the deceased facing each other.
In ghost-hunting circles, it is said that the area between the feet is filled with “competing energies” of the deceaseds’ spirits.
“Ghost hunters tell me this is called a ‘spiritual vortex,’” Mayeux said. “In this vortex, cellphones won’t work, batteries go dead and things like that.
“This phenomenon has never happened to me and I have never seen it happen while I have been present,” he added, “but the ghost hunters tell me it happens all the time.”
Mayeux said other “ghosts” at the cemetery can also be explained.
Groans of the night-walking spirits are “most likely” large tree branches that are moved by the wind, he said.
As noted earlier, unexplained screams could be a fox or an owl.
All manner of critters roam the woods surrounding the site, so the phantom footsteps many report rustling in the leaves are probably raccoons, ‘possums, coyotes, etc. -- Probably.
“It is a spooky place, so it is easy to let your imagination get the better of you,” Mayeux said.
Whether the graveyard is haunted or not, he said it is definitely not a safe place to be after dark.
“It isn’t the restless spirits of the dead that make it dangerous,” he said. “It’s the evil spirits of the living who prey on others.”
Those “demons” are more frightening than the ones in the ghost stories.