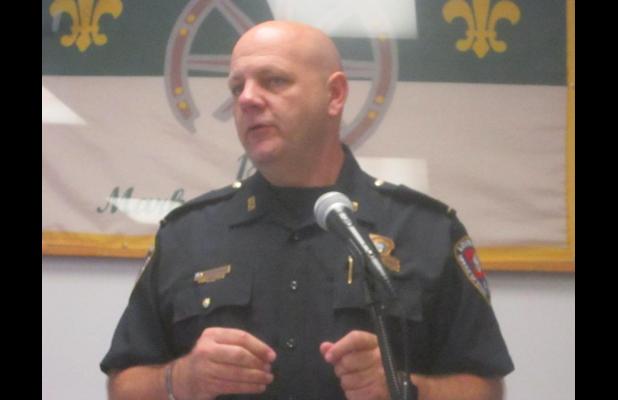 Louisiana Fire Marshal H. Butch Browning speaks to the Marksville Chamber of Commerce about the duties, achievements and challenges of the department. {Photo by Raymond L. Daye}

Raymond L. Daye
Louisiana is a much safer state than it was 45 years ago, but there are still far too many deaths by fire each year, State Fire Marshal (SFM) Butch Browning told the Marksville Chamber of Commerce last week.
Browning, speaking at the Chamber’s Jan. 21 luncheon meeting, said there are about 70 fire deaths each year. Most are in accidental fires and almost all of them are in single-family dwellings.
Perhaps three or four people die in commercial structure fires -- and most of those are using the buildings as places to sleep, he said.
“This office is all about safety,” Browning said.
He said his department inspects buildings to ensure they meet fire safety codes. They inspect carnival rides and firework stands. SFM inspectors review building and renovation plans.
And those are only a few of the tasks the State Fire Marshal’s Office has been given by the Legislature.
Balancing that need to ensure safety is the responsibility to promote economic development by not making the inspection and review process so burdensome that people don’t want to invest in building new businesses or renovating historic landmarks.
For many years, the Fire Marshal’s Office was responsible for one thing -- investigating suspicious fires. There were few, if any, fire safety codes in the state and no statewide code. That changed in the early 1970s with two horrific fires in New Orleans.
Seven women died in a beauty salon in a high rise because they were unaware of a fire on a lower floor until it was too late to escape. There were no sprinklers, no alarms and the construction was such that the fire used the stairwells to race up the building.
A few months later, a nightspot in New Orleans was set ablaze by an arsonist, killing 28 people. The business was on an upper floor with only one way in and one way out of the building.
Those, and many other safety issues, have been addressed. The state is still improving its safety measures by adopting the latest version of a national life safety code every three years.
The office still investigates all suspected arson cases and all fatal fires. Much of its duties, though, focus on code enforcement.
Investigators conduct 20,000 plan reviews and 300,000 fire and life safety inspections each year.
Browning said about 40 percent of those inspections are re-inspections of sites that failed a previous inspection. What is frustrating, he said, is when businesses just refuse to comply with the code. At that point, tickets are issued and if a condition poses a serious threat to life, the business can be shut down until the conditions are addressed.
He said the office is more efficient now than it was when he took the job in 2008. Almost 80 percent of the employees have been cross-trained so that they can handle any function of the office.
Expert investigators are called in for serious arson cases and fatalities, he noted, but routine matters can be handled by almost any officer.
The office has been decentralized so that there are more Fire Marshal deputies outside of Baton Rouge and officers are closer at hand in the event of an emergency.
“We had over 50 percent of our personnel in Baton Rouge,” Browning said. “Unfortunately, 50 percent of our work load was not in Baton Rouge.”
He said his office “has been a participant in the streamlining of government” and state budget cuts over the past few years. He said he has 40 fewer agents now than he did in 2008. However, he said the office gets high marks for productivity and efficiency.
He said he recently met with new Gov. John Bel Edwards and is impressed with Edwards’ insistence on input and including all parties at the table to discuss issues.
In closing his remarks, Browning told the business group that he believes everyone should do four things every day.
“You need to get up and do more than you did the day before,” he said. “You also need to care more than you cared the day before. You need to learn more than you learned before. Then at night, when you go to bed, you need to dream more.
“I believe if you do that,  tomorrow will be a better day.”