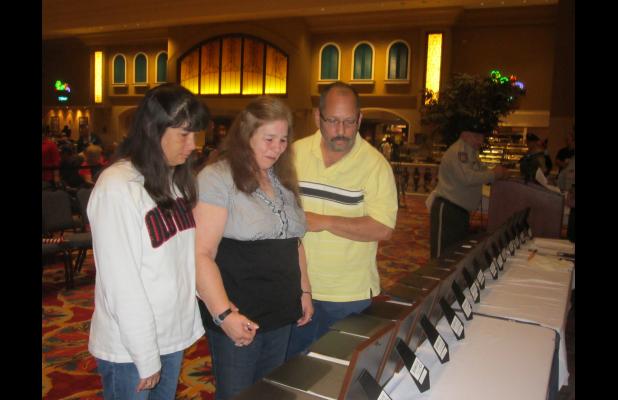 Nobody had to ask the question, “What is Memorial Day all about?”
The answer was written clearly on the tear-streaked face of Gail Sierra as she looked at the memorial certificate prepared in honor of her brother, Michael Nugent, before the start of the Memorial Day ceremony at Paragon Casino Resort.
Monday’s ceremony honored all of the nation’s fallen heroes, from the Revolutionary War to the War on Terror. However, special attention was given to those from this parish who died in a war that many believe should never have been fought -- the Viet Nam War.
Nugent, of Marksville, was a 22-year-old sergeant in the 101st Airborne Division when he was killed on Christmas Eve 1970 in Thua Thien Province. He was one of 14 Avoyelles Parish men who were honored at the ceremony.
The others were:
* Brian James Gauthier, 20, of Mansura, a Marine corporal killed on July 11, 1965.
*Richard Jude Desselle, 21, of Moreauville, an Army corporal killed on May 1, 1967.
* George Randolph, 44, of Cottonport, an Army sergeant killed on June 6, 1967.
* Michael Joseph Juneau, 20, of Hessmer, an Army corporal killed on May 13, 1968.
* Gerald Paul Williber, 22, of Cottonport, a Marine corporal killed May 19, 1968.
* Robert Lynn Daigrepont, 20, of Bunkie, an Army sergeant killed July 2, 1968.
* William Francis Lemoine, 20, of Avoyelles Parish, an Army corporal killed Sept. 26, 1968.
* Mitchell Lawrence Firmin, 20, of Cottonport, an Army corporal killed Sept. 27, 1968.
* Gerald M. Ortego, 30, of Simmesport, an Army warrant officer killed on Nov. 21, 1968.
* Denny Laton Johnson, 22, of Bunkie, an Army 1st. lieutenant killed on Sept. 2, 1969.
* Cecil Jackson Jr., 25, of Avoyelles Parish, an Army sergeant killed on Aug. 29, 1970.
* Ronald R. Greenhouse, 22, of Marksville, an Army corporal killed on Nov. 29, 1970.
* James Henry Abram, 27, of Melville, an Army sergeant killed on April 9, 1971.
This year’s ceremonies were held inside the Earl Barbry Sr. Convention Center instead of at the Tunica-Biloxi Veterans Memorial on La. Hwy 1. Family members were asked to come forward to receive a special packet of information on their fallen veterans.
The day was also marked in Marksville with ceremonies at St. Joseph Cemetery #1 in Marksville and at the Blue Star Memorial sign on Tunica Drive.
Msgr. Van der Putten Court #20929 Catholic Daughters conducted the memorial at St. Joseph. The Marksville Garden Club held the ceremony at the Blue Star marker.
A Memorial Day ceremony was also held at the Veterans Memorial at the Ward 1 Walking Trail in Effie, sponsored by the Ward One Community Foundation.
St. Anthony of Padua Church in Bunkie hosted a ceremony at Pythian Cemetery.