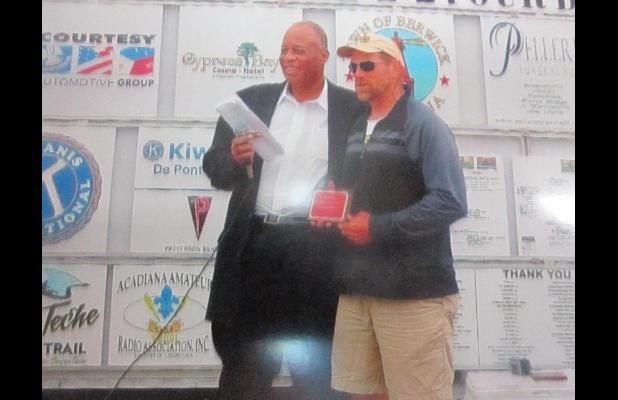 David Dupree (right) of Rayville accepts a plaque from Avoyelles Police Jury President Charles Jones for being the second racer through Avoyelles in the recent Tour de la Riviere Rouge kayak/ canoe race. Dupree was a solo paddler and also finished second in the 275-mile race.

Jones will explore possible Avoyelles river festival for next fall
The hardy survivors of the 410-mile Louisiane river race in October -- and its two smaller sub-parts, the Tour de la Riviere Rouge and Tour du Teche -- received their well-earned awards in Berwick at the end of the race.
Among the awards presented were unexpected recognitions to the first three boats that passed through Avoyelles Parish in the Bossier- to-Berwick marathon race.
Avoyelles Police Jury President Charles Jones traveled to Berwick to present the 1st, 2nd and 3rd place awards -- provided by the Avoyelles Commission on Tourism -- to show its support for the event. Jones was so impressed by the festivities in Berwick that he has said he will try to have a similar mini-festival in Avoyelles in conjunction with the annual kayak/canoe race.
The 5-member team called River Fitness, led by Phil Bowden of San Marcos, Texas, received the 1st place award. The team of four Texans and one member from Vernon Parish, on the Texas border, finished the 275-mile Red River race with a time of 49 hours, 43 minutes and 58 seconds in a 42-foot long, rail-thin, ultralight canoe.
David Dupree, a solo paddler from Rayville, was the second racer through Avoyelles and held on to finish second in the Riviere Rouge with a time of 97 hours, 42 minutes and 6 seconds.
The two-man team of Danny Frazier of Dallas and Chip Little of Winnfield took the Avoyelles 3rd place plaque.
Bowden’s team, all experienced long-distance paddlers and veterans of grueling races in Missouri and Texas, called Riviere Rouge “The Beast.”
They said the Red River winds through the heart of the state, often miles away from civilization. There are about 50 miles where there are absolutely no lights to detract from nature’s night time beauty.
Team member Wendell Smith said it was in this dark stretch that the team witnessed the eclipse of the moon and what he described as a view of the Milky Way that was brighter than any seen at Texas’ Big Bend National Park.
Smith also thought he saw a “rougarou,” or “lupe garou” -- a Cajun werewolf. He snapped a photo with his smart phone, but the resulting photo was “inconclusive.”