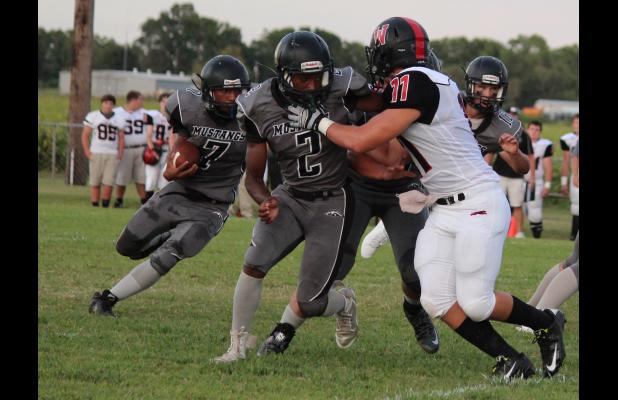 Avoyelles High running back Ryheim Dupuy (7) carries the ball as fellow Mustang Phillip Augustine (2) blocks Welsh High School defender Pearse Migl (11). Dupuy had over 106 yards for the night and Augustine had 232 yards -- including three long touchdown runs -- in the Mustangs’ 50-38 loss to the Greyhounds this past Friday. {Photo by Connie F. Giovanetti}

This Week's Games
By Raymond L. Daye
Avoyelles High will make its longest road trip to play its smallest opponent this Friday (Sept. 11) when the Mustangs travel to Sicily Island -- a football program many thought was dead but has been reborn this year.
The Tigers are high on enthusiasm, spirit, heart and pride. Conventional wisdom says it will take more than that and the home field advantage to overcome Avoyelles’ advantages in size and speed.
In their first varsity game in 17 years, the Tigers fell by one point to the Vidalia Vikings -- who are also in Avoyelles’ 3AAA division.
Avoyelles is coming off a 50-38 loss to Welsh last Friday. Worse than the loss on the scoreboard is the possible loss of star running back Phillip Augustine. Augustine sustained a leg injury in the second quarter of the game, went back in the third but had to leave the game. He was taken to the hospital by ambulance for examination.
AHS Coach Andy Boone said doctors indicated Saturday that it might be a deep bruise. However, they have now said  additional tests may be needed before Augustine can be cleared to play.
SIHS began a football tradition in 1947 that many feared was gone for good when it ended its football program in 1998. From 1947-98, Sicily Island averaged almost 8 wins a season, accumulating numerous district titles and two state runner-up performances in those 51 years. For the past two years, the Tigers have played junior varsity schedules in preparation for returning to the varsity ranks.
Now they’re there.
SI built its football philosophy around the “Notre Dame Box,” a variation of the single-wing, made popular by Knute Rockne’s Fighting Irish in the 1910s and Rockne’s protege, Curly Lambeau, with the NFL’s Green Bay Packers in the 1920s and 1930s.
The box uses a lot of fakes and misdirection. It is set up so that any one of four backs in the backfield could end up with the ball when the center snaps it. The halfback lines up next to the quarterback with the fullback and tailback behind them -- forming a square, or “box.” The back receiving the snap can either run,  hand off to another back or throw a pass.
The Box was replaced by more modern football formations, such as the “T.” It is no longer used by any pro or college team, but some high schools around the country still find success with Rock’s Box.
The Tigers are expected to pay homage to their past by springing at least a few plays out of the Box. However, Coach Stephen Collins said the team also uses more modern spread and wing-T formations.
On paper, it should be an easy win for the Mustangs.   Sicily Island has about 25 players on the sideline. Usually, it is the Mustangs who find themselves outnumbered on the bench. This week, they will have about 10 more players than their host.
If AHS is able to follow its time-consuming game plan, the smaller team will be worn out by the fourth quarter.
Although Augustine is not likely to play Friday, the Mustangs have other able horses in their corral.
It might be a good game for second-string players to gain some game time experience.
Then, again, there’s a  lot to be said for enthusiasm, spirit, heart and pride. It could be a tough fight right up to the final tick of the clock.
MAXPREPS RATINGS
MaxPreps’ strength ratings give the Mustangs a decisive advantage over the Tigers. Avoyelles is rated 213 while SIHS is 298.
Marksville High, coming off its 40-26 win over Washington-Marion, faces Many, who shutout Winnfield 30-0. MaxPreps gives the nod to Many, rated 60th in the state. Marksville is 136th. For Many, it will be their second “Tiger, Tiger” game of the early season.
Bunkie also had an impressive win this past week, beating Pine Prairie, 48-14. The Panthers are rated 218th in the state by MaxPreps and will be facing the Elton Indians, rated 190th. Elton defeated Lafayette Christian, 31-17, in their season opener.