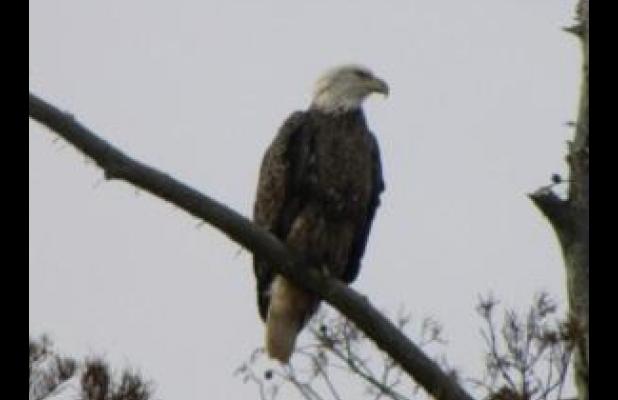 This mature bald eagle seems to be surveying his domain on the Lake Ophelia National Wildlife Refuge. The “King of Birds” has become more visible in the parish, thanks in large part to efforts by the federal and state wildlife agencies. {Photo courtesy of Bradley Bordelon, U.S. Fish & Wildlife Service}

An eagle in flight embodies both power and freedom. For that reason, the bald eagle was chosen as the symbol of this nation.
While still not a common sight, the number of bald eagles living in Avoyelles Parish year-round and following the waterfowl annual migrations “appears to be increasing each year,” National Wildlife Refuge Assistant Manager Bradley Bordelon said.
“We have numerous sightings at Lake Ophelia and Grand Cote each year, especially when we have a lot of waterfowl migrating into the parish,” Bordelon said.
He knows of one active nest, located on private property just outside Lake Ophelia NWR, and believes there may be a few more pairs that live here all year.
“I enjoy seeing a mature eagle in the wild,” Bordelon said. “You would hardly ever see one in this area 20 or 25 years ago.”
Statewide, there were 356 active nests last year. In 1960 there were four and in 1973 there were five pairs of bald eagles.
Almost all of the year-round eagles are in coastal Louisiana, primarily between Houma and New Orleans.
The bald eagle has been called the “King of Birds” by its admirers and “a buzzard with a good PR agent” by its detractors -- chief of whom was Benjamin Franklin, who supported the wild turkey as the nation’s emblem.
The bald eagle is one of the largest birds in North America, with a wingspan of 80 inches -- just a little larger than another majestic resident of the parish, the great blue heron.
The bird weighs 8-12 pounds, with the female being about 30 percent heavier with a stockier appearance.
Bordelon said it is believed the bird can live for over 30 years, but the oldest documented case was of an eagle who reached the age of 29.
He said the eagles usually don’t mate until they attain their characteristic plumage, when they are five years old. There have been cases of eagles mating as young as three years of age.
An eagle's nest, called an aerie, is usually 5-6 feet in diameter and 2-4 feet tall and can take up to three months to construct, with both mates sharing in the labor. The male and female also share in incubating the 1-3 eggs, which hatch in about 34-36 days. Bordelon said the female usually takes the night shift.
The eagle is a bird of prey, feasting on fish, birds, mammals and reptiles. While it often kills its own food, it may also take advantage of carrion.
Lake Ophelia participated in an eagle recovery project from 1992-94, raising 32 eagles and releasing them into the wild. The hope was to establish a nesting pattern and build up a population of the great bird in this area.
The “hacking” program was largely funded by private businesses and individuals.
Bordelon said it appears only one pair got homesick for Avoyelles and set up housekeeping here. That was in 1995-96. He said that pair eventually moved on, but the number of eagles in the parish on at least a part-time basis has increased since then.