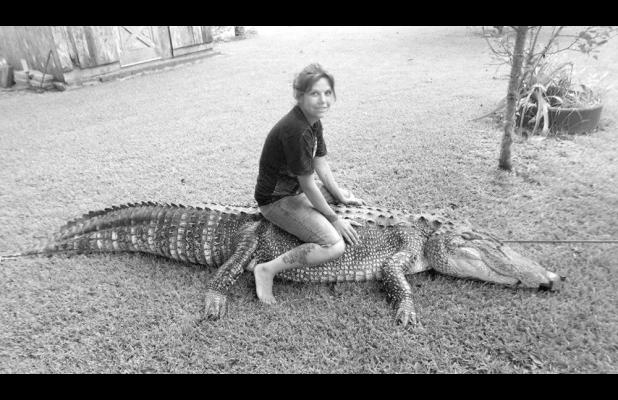 Jenny Deleon sits on a monster 11-foot alligator that is no longer a threat near her Bordelonville home. The big gator came out of Bayou des Glaises to chase a local resident who was doing yard work near the bayou. {Photo courtesy of Lynn Lavergne}

Increase in large animal populations cited as most likely cause of increased reports
Raymond L. Daye
Although there have been more Facebook posts about alligator and bear sightings in Avoyelles, there are no more problems with the two large animals than there have been in the past several years, state wildlife officials said.
“We don’t have any more problems with alligators than we have had five years ago or last year,” Louisiana Department of Wildlife & Fisheries Senior Agent Doug Anderson Jr. said. “I believe that due to the publicity about the Disney World attack, people have become more aware of alligators.”
Anderson said there are “a lot of alligators in Avoyelles Parish “and the black bear population is also growing, so it will become more and more likely they will be crossing people’s paths.
In most cases, the old adage, “Ignore it and it will go away,” is a good rule of thumb. Bears and alligators have the natural tools to kill or seriously injure a person, but both will try to avoid a confrontation with humans.
There was a black bear sighted on Lambert Street in Echo July 2. Another bear walked around Bunkie on July 4, being sighted first on Frazier Street before moving on to Sycamore, Oak and Ash streets. The bear left town before LDWF agents arrived.
The next day, what is believed to be the same bear was seen at GibKo Nursery on Evergreen Street. That bear also left on his own without incident.
Of the recent alligator incidents in Avoyelles, one was a monster weighing 550 pounds and stretching 11 feet, four inches in length. It was killed near the “Bordelonville locks” in Bordelonville on July 1, near the home of Lynn Lavergne.
She said her son was trimming weeds near the water. He called her and told her that the gator “chased him up to the road. We called Wildlife & Fisheries and they came to take care of the animal.”
Another alligator almost seven feet in length was captured alive in a private pond behind Wayne and Barbara Cole’s home in Centerpoint on June 21. LDWF agents released the gator into a wildlife refuge.
The LDWF reports that there were about 3,000 “nuisance” alligator calls last year, which was an increase over the average 2,200 calls in previous years.
Ronald Coco, a member of the Avoyelles Wildlife Federation and volunteer hunter safety instructor, said he teaches young hunters “not to feed the bears and not to feed the alligators.”
He said animals that are fed by humans will become dependent on humans for food and lose their fear of people.
“I was at the Wildlife Commission meeting in Baton Rouge July 7 to bring up a concern by the Spring Bayou Restoration Team,” Coco said. “They were concerned about having 10-foot kayaks in the same bayou with 12-foot alligators.”
Coco said the commission promised to consider the issue and how to address an apparent increase in the alligator population at Spring Bayou.
“I know I have mama and daddy alligators around my house on Bayou des Glaises because I see babies every year,” Coco said.
Coco emphasized the need to keep the wild animals wild.
“Nothing has happened so far, but if a child puts his hand out to feed an alligator and the gator grabs his hand, it’s too late then,” Coco said.
LDWF information
Maria Davidson, the Louisiana Department of Wildlife & Fisheries large carnivore program manager, said last year that “bears are in the area and will continue to be in the area. We are getting more calls about this kind of activity.”
She noted that at this time of year, young male bears are leaving their mothers and are going off on their own. They may inadvertently stumble into a human neighborhood.
“They certainly do not want to be there,” she added.
Davidson said every human-bear contact event is different, and there is no cookie-cutter response to address it. In most cases, the best approach is to “clear out all the dogs and the people and give the animal an opportunity to get out of the situation on his own.”
Avoyelles is considered an important crossroads for bear populations, linking those in northeast Louisiana with those in the southern Atchafalaya Basin. It is categorized as a “growth area” for bears.
LDWF estimates there are about two million alligators in Louisiana. The agency has no official estimate of the number in Avoyelles.
Unofficial sources indicate gators would be counted in thousands while bears are still counted in hundreds in this parish. There are many more gator sightings than bear sightings.
Alligators are more active in spring and summer, so an increase in sightings would be expected, LDWF sources said.