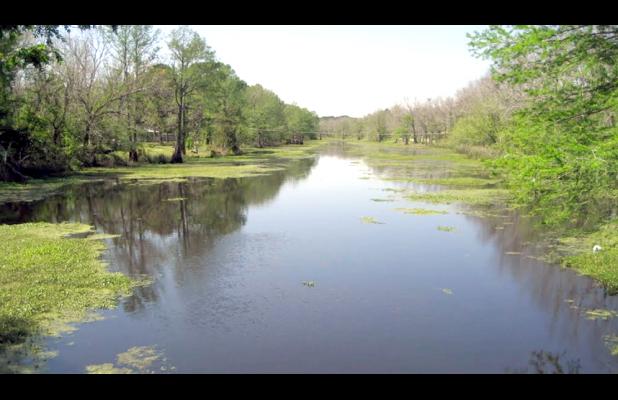 Hydrilla plants line the banks of Spring Bayou in this photo from a few years ago. Due to the release of 62,500 grass carp into the recreation area, hydrilla is no longer a problem.

Raymond L. Daye
In the silent war to restore Spring Bayou to its former place as a premier fishing lake and recreation area, the forces of good have declared victory over evil.
Spring Bayou Restoration Team (SBRT) enlisted an army of 62,500 grass carp to wage war on the hated hydrilla that had choked the once-grand lake.
“There are a few isolated areas where the hydrilla is still a problem,” SBRT Vice President George Israel said. “The grass carp has taken care of the hydrilla problem in most areas and they are moving into those areas that still have hydrilla.”
The introduction of the sterile grass carp began in November 2013 when Israel was president of the citizens group dedicated to improving fishing and recreation on Spring Bayou. It was supposed to continue through this year, but has been stopped since it has already achieved its goal.
Those who doubted the effectiveness of biological warfare against the vegetation have been proven wrong, Israel said.
“This program was not only effective in dealing with the vegetation problem, but the carp cause no other problems that might be associated with addressing the problem with chemicals,” he said.
SBRT had intended to introduce 20,000 grass carp in the lake this past year, but only put in 1,500 “because the problem was almost resolved.”
Hydrilla -- even the name sounds like some evil monster from a B-grade movie -- is a non-native water plant believed to have been brought to the U.S. from Asia in the 1950’s as an ornamental plant for aquariums. It somehow jumped from the home to area waters and began growing like a weed. In fact, the federal government categorizes it as a “noxious weed.”
The carp are not predator fish, like gar and choupique. Fishermen also don’t have to worry about the carp competing with bass and other desirable species for that tasty worm or attractive lure on the end of their line.
“It is highly unusual to take a grass carp with a rod and reel,” Israel said.
The carp prefers to lunch at the all-you-can-eat salad bar, which pleases Israel and other sportsmen just fine.
“Now that the hydrilla is no longer a problem, the grass carp have started eating other water vegetation, which is good,” Israel said.
There is no danger that the carp will be so efficient that it eats all of the vegetation in the lake, which would deprive other species of needed habitat and deprive water fowl of food.
The carp released into the lake are sterile, so there is no threat that the 62,500 fish will over-populate the lake. However, the fish can live to be 50 years old and have reached weights of over 60 pounds in Texas lakes.
“If it is ever determined that there are too many, Louisiana Department of Wildlife & Fisheries (LDWF) can open a gill net season for one or two days and that will solve the problem,” Israel said. “The carp population is very easy to control.”
Israel said a recent LDWF census on the lake “showed the presence of all desirable species of fish, including a large population of shad -- a favorite meal of the large-mouth bass. He said the level of shad in the lake is sufficient to support the large number of bass fry released into the lake last year.
The combination of the hydrilla-reduction program and the good news on the fish population could mean more bass fishing tournaments in Spring Bayou’s future, he said.
“Those tournaments bring in people from out of town and even from out of state,” Israel continued. “They would be a benefit to the community by bringing in some sales tax revenue.”
Israel said Spring Bayou weathered a drought last year with no significant fish kill, but SBRT and other outdoor sports enthusiasts will be asking the La. Legislature to take steps to prevent a possible disaster in the future.
“We don’t want to prohibit farmers from pumping water out of the bayou to irrigate their crops,” he said, “but there needs to be some restrictions in place when the lake drops to a certain level.”
SBRT is also closely watching the potential flooding situation and hoping the Red River does not back up into the lake and cause any loss of game fish or other problems.
Grass carp prefer flowing water and could take the opportunity to leave Spring Bayou if Big Red came in and offered them a ride to the Atchafalaya.