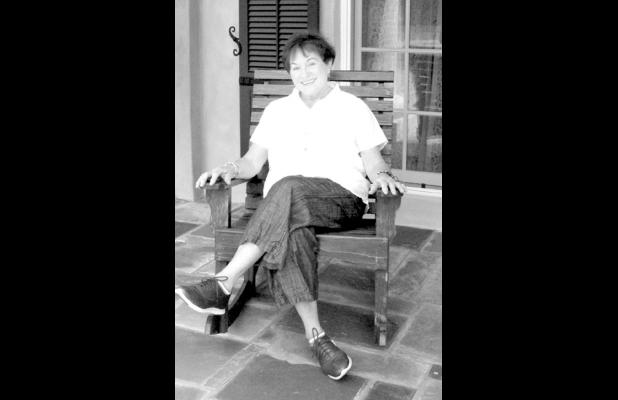 Jeannette Knoll, who will be retiring this year as an associate justice of the Louisiana Supreme Court, relaxes on her front porch in Marksville. Knoll is looking forward to serving as grand marshal of the Marksville July 4th Parade. The parade is sponsored by the City of Marksville and the Marksville Chamber of Commerce. {Photo by Crystal Fuqua}

Raymond L. Daye
For almost 50 years, Jeannette Theriot Knoll has been an attorney, a public defender, an assistant district attorney, an appeals court judge and a state Supreme Court justice.
Now she is ready to take on two new jobs -- “to be a housewife, something I’ve never been able to be, and a full-time granny.”
But first she will have to serve as this year’s grand marshal for the Marksville July 4th Parade, which will roll through downtown at 6 p.m. on Independence Day.
“I’ve lived in Marksville for 49 years, and it is a great honor to be recognized as the grand marshal for our biggest parade, the July 4th parade,” she said. “I’ve been in a lot of parades in my political campaigns, but I always walked. This time I will get to sit,” she added with a laugh.
Knoll is married to former Avoyelles District Attorney Eddie Knoll. She served as a 3rd Circuit Court of Appeal judge from 1983-96 and has been an associate justice on the state Supreme Court since 1997. She will retire at the end of this year.
“Dec. 31 at midnight is the official end of my term,” Knoll said.
She is looking forward to spending time around her house on Tarleton Street with her husband, children and grandchildren.
“The backyard is a park,” Knoll said. “I have two male peacocks and one female, there are many red birds, ducks, squirrels, raccoons. I enjoy looking out my window when I work at home. Now I will enjoy it even more.”
She said winter is actually her favorite season because she can see from her house to past Bayou Pierite. In the other months, there is too much vegetation.
The tiny chapel in the backyard is especially dear to her. It has the original church bell from St. Martin of Tours Church in Belledeau and miniature pews.
“We have had several Masses said in the chapel,” she noted.
Knoll said that apart from a few “bucket list” items, such as to visit the Vatican in Rome, there is nothing more she wants to do than to retire to Marksville and enjoy life and family.
“I will be fully retired,” she said. “I have told the chief justice that I do not want any assignments. The Supreme Court appoints retired justices to serve on the bench in the event of recusals or a vacancy. I told them I do not want that.”
Knoll said she has walked in many July 4th Parades in Marksville, and it is known as one of the biggest Independence Day parades in the state.
“It used to be more of a political event,” she said. “Politicians would walk in the parade and give speeches at the end. It is more community-oriented now.”
While she is honored and excited about the impending parade, she said she does have one selfish wish.
“I am hoping for a light shower during the parade,” Knoll said with a smile. “When I was walking a parade, heat was always a factor and those showers helped to cool things off.”