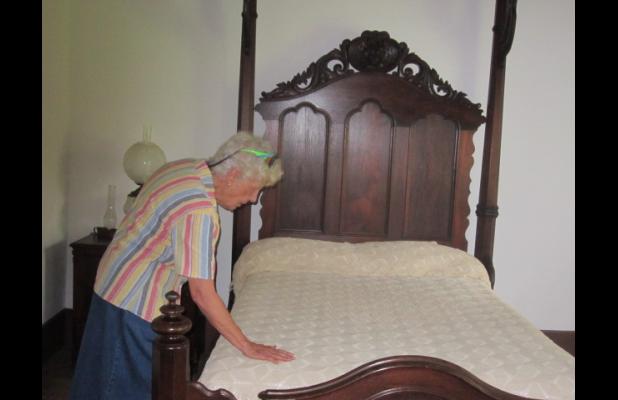 Discover Avoyelles
{Editor’s Note: “Discover Avoyelles” is a series of articles about attractions in Avoyelles that could be a short activity for families this summer. This edition features the Desfosseé House in Mansura.}
By Raymond L. Daye
There may be some disagreement on the proper way to spell the name of the family that once owned Avoyelles’ oldest known home, but there is no disagreement that it is an important historical link to this parish’s past.
The Desfossé House, still in its original location, was built in or before 1790 by Dominique Coco Sr. The home was later bought and modernized by Dr. Jules Charles Desfossé in 1852. Desfossé converted the original double-pitched roof to a single-pitched roof, a style now known as Louisiana French Colonial.
The name is pronounced Day-fo-SAY. Some contend it should be spelled Desfossé and others say the family probably spelled it des Fossé before moving to America from France.
The structure was the first Avoyelles Parish entry on the National Register of Historic Places, earning that honor in 1981.
Pat Coco Martin, a descendant of the original owner of the property, mans the visitors’ desk one day a week, on Fridays. Entry is $2 for adults and $1 for children.
The house was bought by the Town of Mansura in 1974. It is nestled among the Mansura Fire Station, Town Hall, Police Department, Cochon de Lait Pavilion and within view of the former Mansura High School and football field.
1850’s furnishings
The home’s furnishings, while not owned by Coco or Desfossé, are 1850s era pieces. Great care has been taken to make the home as authentic to the mid-1800s or earlier as possible.
La Commission des Avoyelles manages the museum. Ms. Martin said Carlos Mayeux Jr., co-founder and long-time president of the organization, has been instrumental in preserving the structure and maintaining its historical accuracy in furnishings.
Ms. Martin said she grew up in Mansura, moved away and then came home. She makes no apologies for her love of history and the place buildings like Desfossé House plays in local history.
“Avoyelles and Mansura have so much history,” she said. “I like history because I like to see where we came from and learn about the colorful people who lived then.”
The house was closed for several years due to lack of funding and volunteers. It now open on Friday and by appointment, but it is hoped that the house will be able to extend its operating hours.
The house is architecturally significant because it still contains the bousillage insulation -- a mixture of mud, moss and deer hair -- behind the walls. There are sections of this mixture visible in the home.
Among the many antiques in the house are a gold leaf mirror, empire sofas and chairs, a marble top table with a swan design, a rosewood bed with a crocheted spread and a walnut table with caned chairs.
First map
Perhaps the most important “decoration” in the house is an old piece of paper by the dining room chimney -- the oldest known map of Avoyelles Parish, drawn in 1829.
There is a second floor, accessed by stairs on the back porch, where additional bedrooms were housed.
The second-floor bedrooms are off-limits for safety reasons, Ms. Martin said.
The fireplace mantles in the front parlor and master dining room are of faux marble and are original to the house, as is the wood flooring, Ms. Martin noted.
It does not take long to tour the small home -- making it perfect for a day trip combining several local sites into one outing.