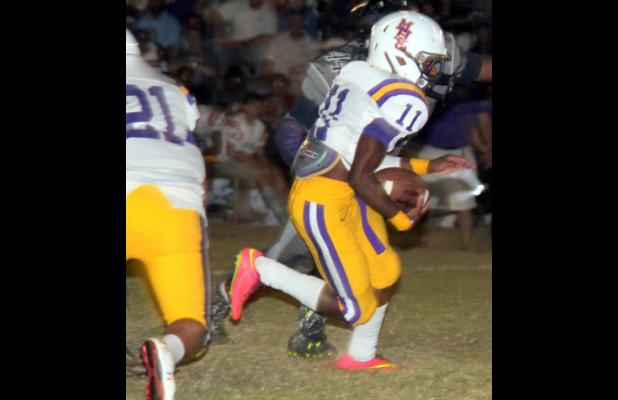 This Week's Games
By Raymond L. Daye
This week is Homecoming at Marksville High. The Tigers played Bolton at Bolton last week, so one might be expecting to welcome Vidalia or Buckeye to the Wheel City this Friday.
But nooooooooo.
Enter the undefeated Jena Giants, instead.
Now, granted, if the intent was to give the Homecoming fans a good game, this was certainly a coup. Usually, though, a school tries like the dickens to entice a team to the dance that might not throw punch in the face of its host.
Rule 1 of high school football: If you win only one game this year, win  your Homecoming.
Rule 2: If you lose only one game this year, it cannot be your Homecoming.
Since I already have a fatwa issued on me from Vidalia, I will try not to overly aggravate our gentle, friendly Giants of the north.
Truth be told, those we have spoken to are not completely unbiased observers. However, those we have spoken to are, shall we say, “underwhelmed” by the Giants 6-0 overall record and 3-0 district mark.
Jena is not being given the respect its record would indicate it is due because it has had a relatively weak first six games -- or, so goes the observers’ observations.
Its three district games have been against Vidalia, Winnfield and Buckeye. Of the three, Winnfield was the only one that could’ve given them a good fight -- sorry, I forgot.
Jena caught Winnfield the week two Tiger starters were suspended for a third-quarter fracas against Peabody. The final score of the Giants-Tigers game was 21-0.
Marksville also benefitted from the Peabody-Winnfield tiff, facing a Warhorse team with five starters suspended and two injured when it took a 34-0 decision in the post-fight contest.
In the spirit of truth in advertising, Jena did score a win over a larger Tioga squad, 32-28. Also in that spirit, Tioga is currently 2-4 on the year.
We are sure we are not the first pundit to opine about whether Jena is “for real.”
‘Danger Points’
That brings me to this week’s “danger points.”
On Marksville’s side, they have a Homecoming game to win. Their toughest district foe so far this year was a shadow of itself when they met, so the Tigers are also in a position where they have something to prove to doubters.
On Jena’s side, they need to shut people like us up about their “weak schedule” and take control of the 3AAA title chase.
If Jena manages to beat Marksville, then Marksville has to hope Peabody beats the Giants -- which is quite likely, if they aren’t beset with injuries or such.
Before that can happen, Peabody will be hoping that Avoyelles will let bygones be bygones, forget that little 48-14 thing, and help the Warhorses out by beating the Giants next week.
Mustang Coach Andy Boone has noted that he is 6-0 against Jena in his previous six seasons at Avoyelles, and he is not expecting to end the streak this year -- despite the wide gap between his team’s MaxPreps’ rating and Jena’s.
If Marksville beats Jena, it closes out the season with  Vidalia, Buckeye and Winnfield.
Anything can happen in football, but of the three it would appear only the northern Tigers have a chance at stopping Marksville from taking the district crown under that set of circumstances.
Avoyelles vs. Winnfield
Now, about those Mustangs.
Avoyelles travels to Winnfield Friday in what can only be called a “must-win” game to salvage the ‘Stangs playoffs hopes.
If they beat the Winnfield Tigers, they still have to get past Jena the following week and then hope they don’t trip over Bolton and Buckeye. If they can’t beat Winnfield, then only the truest blue of the Mustang faithful would hold out hope of an upset over Jena.
After the defeat by Peabody, Boone said his team has to win at least three of the next four.
Prior to the season, he said he was most worried about playing Winnfield in Winnfield. Since then, he has said the Tigers have not shown him as much cause for worry as he had expected based on the school’s previous football tradition. However, it is Homecoming in Winnfield -- the third Homecoming in a row for Avoyelles. They won theirs and lost Peabody's. This is the tie-breaker.
Bunkie vs. Pickering
Over in 3AA, it’s two weeks before Halloween but Bunkie will be overrun with “black cats” and “red devils” this Friday.
The Bunkie Panthers play host to the Pickering Red Devils.
It should be noted that Pickering’s mascot is not in honor of the Dark Lord, but of the U.S. 5th Infantry, called the Red Devils -- die Roten Teufel, in German -- for its heroic exploits in World War I. The name came from the unit’s red diamond ensignia.
The 5th used to be stationed at Fort Polk. The unit has now been deactivated and relegated to history, but the name lives on at Pickering.
Kind of like the relationship between Bunkie and the extinct Florida panthers that used to live around here.
Bunkie hopes to solidify its claim to second place in the district. It gained a measure of respect from Bunkie bashers by playing tough defense against the defending state AA champion Many -- who, unfortunately for the Panthers and the other four district teams, is in District 3AA.
The Panthers’ offense was held in check by the Tigers from Sabine Parish.
There will be no rest for Bunkie, who will have to face the high-flying Menard Eagles the following week.
Strength ratings
MaxPreps’ strength ratings would have us believe the best matchup of the week is the Bunkie-Pickering fling. Bunkie is rated 129th in the state this week, eight places ahead of Pickering at 137.
The online sports site indicates a sour note for Homecoming for the Tigers. Jena is 96th in the state and Marksville is 115th.
MaxPreps thinks Boone has dismissed his worries prematurely, ranking Winnfield at No. 175 and Avoyelles at No. 217.