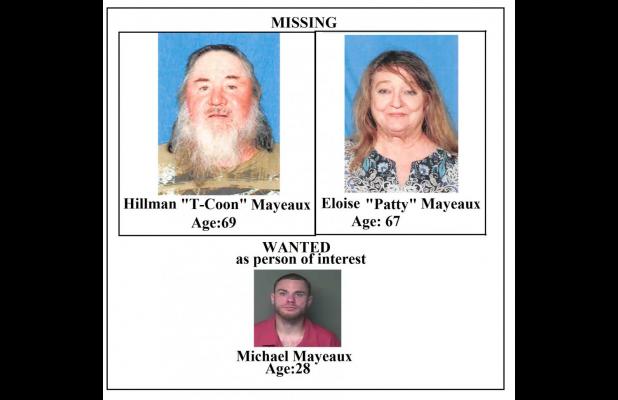 UPDATE 12:45 p.m.
Sheriff’s deputies have discovered the bodies of Hillman and Eloise Mayeaux in a barn near their home. The investigation is ongoing. More details will be made available at the appropriate time.

Sheriff Doug Anderson said that at about 7:00 a.m. Wednesday morning his office received a call regarding a welfare concern for Hillman "T-Coon" Mayeaux, 69, and his wife Eloise "Patti" Mayeaux, 67, both of 6633 Hwy 451 Bordelonville. Family members became concerned when Mrs. Mayeaux did not show up for work and were unable to contact either of the two. Deputies and family members later made forced entry into the Bordelonville home and neither of the Mayeaux’s were found.

Sheriff Anderson said that after a brief search of the residence and grounds deputies found evidence of possible foul play which may be related to the couple's disappearance. A crime scene has been established and a search warrant secured for further investigation. The R.P.S.O. Crime scene unit is assisting A.P.S.O. with processing the scene at this time.

The Avoyelles Sheriff’s Office is looking for Michael J. Mayeaux, 28, as a person of interest relating to the disappearance. Michael Mayeaux is the grandson of the elder Mayeaux. He is 5’4” with brown hair and blue eyes and weighs 130 lbs. Anderson asks that anyone with knowledge as to his whereabouts please call the Avoyelles Parish Sheriff’s Office at 318-253-4000 or your local Police Dept. immediatley.

There is no further information available at this time.