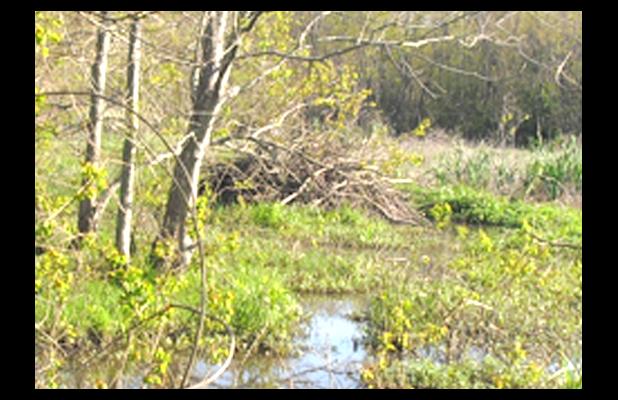 That pile of brush in the middle of the photo is a beaver lodge near Mansura -- home base for one of the nation’s largest species of rodents and a major drainage headache in Avoyelles Parish. Beavers dam up natural and man-made drainageways, flooding large areas. Parish officials are renewing their battle with beavers.

Advertising for one or more parishwide trappers
Raymond L. Daye
When it comes to drainage problems, Avoyelles Parish is literally made to be a textbook example. Low-lying lands, numerous natural waterways, substantial rainfall, substandard infrastructure to handle the flow quickly.
What the Police Jury does not need is one more element to aggravate an already aggravating problem -- beavers.
The jury’s program last year resulted in many of the flat-tailed, buck-toothed, dam-building rodents going to that big beaver lodge in the sky. Unfortunately, not nearly enough to put a dent in the animal’s construction program.
At the jury’s committee meetings on Dec. 2, Juror Jim Guillory recommended changing the current policy on hiring beaver trappers in hopes of encouraging more trapping of the parish’s beavers.
The current policy requires the trapper to work parishwide, under the supervision of the parish superintendent. The purpose is to allow the superintendent to direct the trapper to work in an area with an immediate need.
Guillory said he knows of at least one person who would be willing to trap in the eastern part of the parish, near where the would-be trapper lives. However, the man would not be able to trap in other areas. There were other comments from jurors about similar situations in other areas of the parish.
The parish currently has no trapper and beavers are causing problems all across the parish.
The Police Jury pays $45 per tail, but it only pays the trapper or trappers with whom it has a contract. It also pays for  mileage for the trapper to go around the parish.
“Drainage is a top priority,” Jones said. “We have two-thirds of the parish in a flood plain. We can’t solve all of the drainage problems, but we can improve the conditions. This is a problem and we will just have to continue ‘rassling’ with it.”
Jurors said the policy will be reviewed, possibly allowing for the contracting of several “district” trappers rather than requiring the trapper to work parishwide.
At the jury’s regular meeting this past Tuesday, jurors authorized advertising for a parishwide beaver trapper.
At the committee meeting, there was a comment about possibly having an open bounty for anyone bringing in a beaver tail.
While that might encourage weekend hunters to take to the marshes to earn a little extra cash, and help reduce the pest’s population, it also poses another problem.
“We would  be getting beaver tails from as far away as Shreveport and New Orleans,” Jones said. “We don’t want to buy any Shreveport beaver tails here in Avoyelles.”